Him: Your stories would make a great book! Each relationship could be a chapter with the last chapter about the man you decide to marry and spend the rest of your life with!

Prior to starting chemotherapy for breast cancer, my oncologist asked me if I planned to have children.

“I’m going to adopt a girl who is of elementary school age,” I said, matter of factly. I didn’t need any information about freezing my eggs since I never envisioned getting pregnant or giving birth.

When I was going through treatment for breast cancer, I would picture the daughter that I would adopt as a source of inspiration. I couldn’t see her face, but I visualized her black hair in pigtails with a white cardigan over her navy dress.

I didn’t know then what I know now. I wasn’t meant to adopt. I was meant to meet The Man, fall in love and astonishingly conceive.

Medical professionals don’t typically use words like, “miracle,” but with my pregnancy, they did. During my bi-monthly sonograms, four different radiology technicians commented that my daughter-to-be was gifted and sassy. I would smile and remind myself that she was just a fetus. But, a part of me realized that even as a fetus, she had already proven that she was strong!

After the doctors delivered my daughter, Roya, one of them commented that my ovaries were postmenopausal. Medically, there wasn’t an explanation for my pregnancy or her birth. And yet, in spite of all the odds and obstacles, Roya was born.

I’ve heard from quite a few people over the past year that Roya’s birth has given them hope. It’s important to believe that the seemingly impossible is in fact possible. She is living proof that miracles can happen!

Several doctors and friends have commented that Roya is destined for greatness. Well, greatness is subjective and ascribes to certain conventional benchmarks of success. I hope that whatever the future holds for Roya, she realizes that she’s great just as she is.

On the eve of Roya’s first birthday, I held her in my arms with tears in my eyes. So much of the past four years was unplanned, but I guessed one thing correctly: 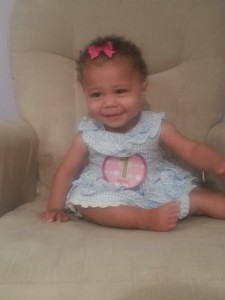 My daughter would be the love of my life.