Both my friend and I were diagnosed with early-stage breast cancer in 2010. We followed our doctors’ recommendations regarding surgery and treatment to a tee. In 2011, we both rejoiced over the scans that showed we were cancer-free. We had beaten breast cancer! We were survivors!

For over a year, I had worn the survivor badge with pride. I earned it after all, didn’t I?

As I became more active with the online breast cancer community, I noticed that many of the advocates I admire didn’t use the word, “survivor,” when referring to themselves. The documentary, Pink Ribbons Inc., provided some clarity regarding these women’s decision not to embrace survivorship.

In her review of the film, Brenda Sabo explains:

The cultural norm within pink ribbon implies that if one complies with treatment, if one battles hard enough or if one is strong enough cancer can be beaten. In essence, the message emerging from the promotion fails to achieve a balance between hope, understanding and the reality of breast cancer — it kills up to 59,000 women in North America every year.

For women with advanced disease the message is about personal failure, of losing the battle. As one woman stated, “You can die in a perfectly healed state.” Survivorship is a label, an unintended put-down of women and men who don’t survive, who were unable to beat the disease.

Lately, I’ve been thinking a lot about Stage IV breast cancer. My friend is no longer in remission. Her breast cancer has returned and is now in her lungs and bones. She was told to get her affairs in order.

I pray for a miracle for her and for all those who are battling terminal illnesses. I pray for the day when there is a cure, and everyone can be a “survivor.” Until that day, though, I’m looking for another word. 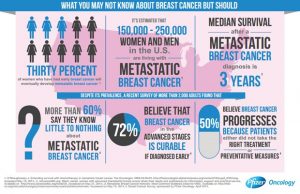