It's time for a reader's question, and this is a good one!

Question: My name is Ethan, and I thought you might be good to turn to for advice, so here goes. I met Jen, a very intelligent and attractive woman, at a museum exhibit opening a few weeks ago. She's a teacher in her early 30s. (I'm in my late 20s, so a little older than me.) We had been talking for about a half hour and really developed a great rapport. We had even made tentative plans to meet for coffee sometime.

Then, things suddenly went downhill. There was a pause in the conversation and since she had classic curves (large bust, narrow waist, etc.), I commented that she had a “really nice, hourglass figure.” My intent was to be complimentary and a little flirtatious, but instead she became deeply offended that I was talking about her figure. I went into damage control mode and tried to clarify my comments, but the more I talked, the more I exacerbated things as she rolled her eyes and shook her head. She told me I was being "inappropriate" and that she was "very disappointed," and then WHAP! She slapped my face and departed.

As I stood there alone rubbing my cheek, I was trying to figure out why she was so upset. Do you have any thoughts? Do you think I should email her an apology note?

Answer: Ethan, It sounds like that was a rough night for both you and Jen.

As a general rule, I recommend that guys steer clear of comments about a female’s weight or body type. Curves are a good thing to most men, but that doesn’t mean that a woman feels comfortable with having them. The use of the word, “hourglass,” might also be disconcerting to a woman, as it occurs when the hips and bust are of equal size.

To me, a Botticelli painting of women and their hourglass figures is sexy. Current standards of beauty unfortunately view those women as overweight, though. We don't know if Jen has been subjected to cruel comments about her figure or has body image issues. And, Jen didn't know you well enough to understand that you were being complimentary. 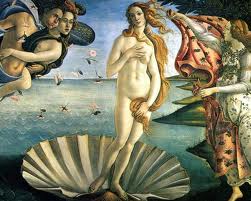 I advise never talking about a woman’s appearance on a first meeting or date and never ever talking about her weight. Hold off on making complimentary comments about her curves until you are in bed with her. (That ensures that there’s a level of comfort between the parties and that the comments are of a positive nature.)

When there are awkward pauses in a conversation, bring up something innocuous like the weather, sports, a movie or one of the pieces at the exhibit. Or, you can ask the other person a question about his/her place of birth, last trip, job or favorite restaurant.

I think we’ve all been in those situations when we try to clarify a comment that was misinterpreted only to make things worse. I’m not sure what else was said, but it was completely inappropriate for her to slap you, even if she was offended.

The fact that you are still thinking about her and this evening several weeks later shows that:

1) You felt a definite rapport with her; and/or
2) You feel really bad about what transpired.

You don’t need to contact her, and I imagine that she’s not expecting you to do so. However, if you’d like to apologize to her again, then a short email would be fine. You could write something to the effect of:

I wanted to apologize again for offending you. I sincerely enjoyed meeting you and feel badly that the evening ended as it did.

I wouldn’t include a question or comment that requires her to respond. I also wouldn’t mention seeing her again. If she wants to contact you, she will. Otherwise, you might have to chalk this experience up to a lesson learned.

So, readers, what are your thoughts? How have you reacted to comments about your appearance from a person you were interested in?