At Gymboree, a then 10-month-old Roya was playing with two 15-month-old boys. One of the moms approached me and said, “She’s very cute.” I thanked her. She then moved over to Roya, extended her hand, and said, “High-five.”

Roya just stared at the woman so I interjected, “She doesn’t know how to ‘high-five’ yet.”

The woman’s eyes opened widely. She took her hand away and commented with a twinge of discomfort, “Oh, I’m sorry.”

The woman looked at the other mother in a manner that conveyed a blend of pity and disapproval.

The three babies continued to play together before the boys walked in one direction and Roya crawled in the other.

Seeing Roya crawl, the woman realized that she had guessed Roya’s age incorrectly.

“She just turned 10 months,” I answered as the two moms expressed their surprise.

“We thought she was older since she’s so tall!” one exclaimed.

“It was great how well they played together,” the other commented.

As I smiled and headed off toward Roya, I chose not to state the obvious: That in just a few minutes, Roya went from “slow” to “gifted” in their eyes.

Since I had never seen these women before, I restrained myself from saying the following:

Stop with the competition. It’s not a race.

We do not need to measure ourselves against each other as parents, and we definitely don’t need to compare our children to each other. As any adult knows, there is always someone out there who is able to do something better, faster or easier than we are. That has been and will continue to be the case at any age and stage!

My daughter’s ability – or lack thereof – to give you a high-five will have no bearing on her future. No one includes when they said their first word on their LinkedIn profile or mentions on a college application how old they were when they took their first step. The parents at Gymboree thankfully have healthy children who will reach all the milestones soon enough. Not every parent is so lucky! 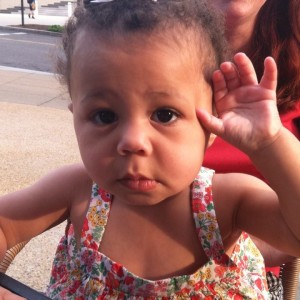 A child’s milestones should be celebrated with joy and gratitude, not serve as a point of comparison to determine who is advanced and who is developmentally below the curve. I don’t feel bad or sorry for those milestones that Roya hasn’t reached. Likewise, I’m not paying tuition to Wellesley just yet because of the milestones that she reached early.

Stop the competition. It’s not worth the energy!

I wish this type of competition wasn’t so common! I’d love to hear some of the competitive moments that made you shake your head in the comments.