Move over Adam Levine; Jonah Hill has you beat this Valentine’s Day. According to a survey by Landing Mr. Right, a hilarious new board game for single women in pursuit of “the One:”

Research Now™ conducted the survey, which polled 750 single women aged 23-55 who said they still haven’t found “Mr. Right.” The survey questions were inspired by the NEW board game, Landing Mr. Right, which has just launched in time for Valentine’s Day. Created by Alys Daly and Victoria Brewer (both single), Landing Mr. Right has been dubbed “Therapy in a Box” as it helps build confidence and friendship among women. 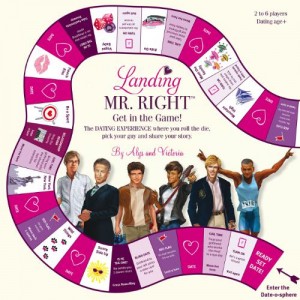 “We came up with the idea for Landing Mr. Right after I went out on one of the worst dates of my life,” said Co-Founder Daly. “We realized what women were really looking for is a fun way to come together, share their stories and offer each other inspiration as they pursue ‘the One.’”

Landing Mr. Right leads women on a virtual dating journey to find their own “Mr. Right.” Along the way, they have the opportunity to date six stereotypical men including: Blue Blood, CEO, Rock Star, Regular Guy, Triathlete and Techno-Geek. Date Cards take women on a worldwide adventure – from Paris to New York – while Your StoryCards tackle everything from online dating to meeting his family. Questions, such as “They’re making a Broadway show about your sex life. Is it a comedy, a romance or a one-woman show?” get women thinking, laughing and discovering new things about themselves, their girlfriends and the men they date.

“Landing Mr. Right gives women the opportunity to date outside their comfort zone,” says Co-Founder Brewer. “If they’ve always gone for romantic, yet unreliable Rock Stars, why not roll the die with a loyal and predictable Regular Guy?”

Landing Mr. Right retails for $34.95 and can be purchased on www.LandingMrRight.com and at select retailers.

Do you agree with the survey results?

For those of you who have found Mr. Right, how did you land your man in this game called love?

E! Online just featured Landing Mr. Right in its Valentine’s Day Gift Guide, and Essence Magazine said that the game is the perfect way to celebrate!

Want to win the Landing Mr. Right board game for you or a friend?

Rules: Only one entry per person. The giveaway will run through Wednesday, February 19th at 11:59pm EST. The winner will be chosen randomly by Random.org and must reside in the United States.

Good luck in winning the game and Landing Mr. Right!

Disclaimer: Pursuant to FTC guidelines, there was no financial or in-kind compensation in exchange for this post or the hosting of this giveaway.