I’m halfway through my pregnancy this week, and quite a few friends have commented that I don’t look pregnant.

Do I regard those remarks as compliments? Of course! However, I take them with a grain of salt. The time will come in the not-so-distant future when I won’t be able to hide the fact that I’m pregnant and my regular clothes will no longer fit.

It's simultaneously fascinating and disheartening how preoccupied women are with their weight during and after pregnancy. I wish that our culture put greater emphasis on what’s important. The average baby is 20 inches in length and weighs between six and nine pounds. How can women expect that their bodies won’t change dramatically during that process? Isn’t it far more important that the mother-to-be and baby-to-be are healthy than the number on the scale?

Any friend of mine who has given birth knows exactly how many pounds she gained during her pregnancy and how long it took her to lose the weight or how much weight she has left to lose. New mothers typically are juggling 20 balls in the air at any given time. Why add unnecessary pressure about weight into the mix? At a minimum, doctors believe that it should take a woman as much time to lose pregnancy weight as it did to gain. That unfortunately doesn't happen overnight.

Our society’s preoccupation with weight also extends to how we treat people who are heavier. We should regard insults and judgment about obesity as unacceptable, and yet, those remarks are often either encouraged or condoned. In an essay by Harriet Brown in The New York Times, she writes:

I’ve sat in meetings with colleagues who wouldn’t dream of disparaging anyone’s color, sex, economic status or general attractiveness, yet feel free to comment witheringly on a person’s weight.

How does that issue relate to pregnant women’s views on their own weight? Well, for many, it thankfully doesn’t. For others, though, the issues are unfortunately related.

I found this abohorrent t-shirt online. If you conduct a broader search, you’ll see that there are many similar shirts, buttons and a book using the same phrase. 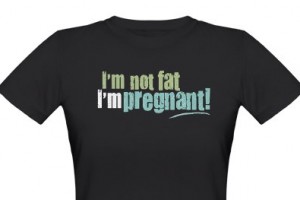 How is this not regarded as prejudicial? Why would anyone tolerate the casual use of such expression, let alone buy a product that contains such a disgraceful phrase?

What are your thoughts on the t-shirt? Have you heard this expression or seen anyone wearing these products? How did you respond?