During my last sonogram two weeks ago, Baby Girl weighed in at four pounds and one ounce. The average fetal weight at 31 weeks is three pounds and five ounces. Given Dr. Real Deal’s concerns that her weight would be below average, this was wonderful news!

Although not problematic, my weight is far from ideal. In eight weeks, I’ve only gained two pounds. That’s not the norm at this stage of pregnancy. On the one hand, my doctors aren’t too concerned since Baby Girl is growing so well. On the other hand, they'd feel better if I gained some weight as a cushion.

My health over the past month resembles my pre-pregnancy and pre-cancer health. I get sick on an almost daily basis. On those days when I’m also hit with a migraine, I get dehydrated very quickly since I don’t have much in the reserves.

On Monday morning, I woke up dry heaving and didn’t have any luck keeping crackers or ginger ale down. I threw myself a pity party in the bathroom for a few minutes, as I tried to figure out how I would be able to get through these bad health days while caring for a newborn.  For some odd reason, I decided to pull up my Facebook feed in the midst of everything else and saw this image: 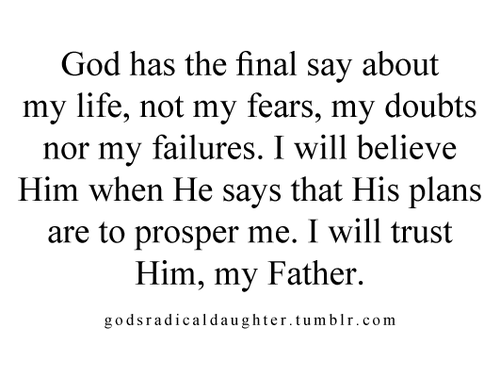 As has been a recurring theme in my life, I was reminded yet again that the opposite of fear is faith. My tears subsided, as did the pity party. The vomiting unfortunately continued.

Later that afternoon, I ended up in the ER for dehydration. I highly doubt I would have needed to go to the ER two times in two weeks if I had been able to take my very strong migraine medicine while pregnant. IV fluids, along with pain and anti-nausea medications, helped break this migraine cycle, but there's concern that a pattern is developing. I can resume my old migraine medicine after she arrives on May 31st, but my doctors and I hope that I'm not in and out of the ER until then.

While I was in the hospital, the ER doctor checked Baby Girl’s heartbeat, and thankfully all is well. Her strength continues to give me strength, and I’m constantly reminded of His strength. Any mother you talk to has to juggle many balls in the air at once. Once Baby Girl is here, I’ll have to do the same. I’m not exactly sure how it will work out, but I have faith that it will.