Stef Woods has been called D.C.’s Carrie Bradshaw. In many ways, she could be likened to the whole cast of Sex in the City.

Woods, WCL ’99, details the juicy ups and downs of love and sex in Washington, using code names for the men in her life (Mr. Big meet Buckeyes Boy). She was once a hard-nosed redheaded lawyer, á la Miranda. She possesses Charlotte’s optimism, without the hapless romantic overtones. Like Samantha, she’s blunt about her sexuality, and that comfort in her own skin allowed her to face breast cancer with radical honesty and a tone of empowerment.

Under the moniker City Girl, Woods invited the city out on dates and into her bedroom. When she launched her blog in December 2008, the then immigration lawyer kept her posts anonymous. She was making a name for herself in policy circles by day. By night, she was City Girl, a cartoon of a leggy redhead, the only clue to her true identity.

As the site launched, Woods remembers being excited by reaching 100 hits per day. She rehashed old stories of dating mishaps. There was the blind date who met her for coffee, expected her to pay and had her drive him to the bank and run a few other errands. There was the hopeful suitor found on Match.com who asked to have their first date at the New York Port Authority (what Woods calls a building “just one notch above a sewage treatment plant”). She tried to leave a few months lag time between real life and her posts, to give more promising relationships time to evolve before they became blog fodder.

Then she met “Buckeyes Boy.” The whirlwind romance began, aptly, at a tweetup. The two moved in together after a week. He was a “very charming freeloader” who broke up with her by blocking her on Twitter. Woods calls it the “social media version of the Post-it note breakup” (another Sex in the City reference that you either get, or don’t).

All was not lost. “He gave me blog gold.”

She had a story arc, the unraveling of lies. Her blog jumped from 3,000 hits a month to 30,000. This was around the time that Woods decided to take a year off from practicing law.

She joined the American Association of Sexuality Educators, Counselors, and Therapists as a supporting member. “That’s the three-degree woman in me,” says Woods, who in addition to her law degree, also holds an MALS from Georgetown. “I wouldn’t feel comfortable giving advice without any foundation in what’s safe.” 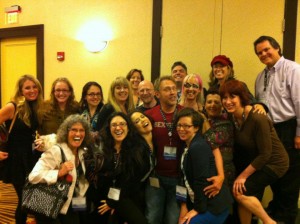 With fellow sex educators at Momentum 2012

Stef writes and speaks about varied topics within the field of sexuality, including relationship blogging, the intersection of sexuality and social media, the use of toxic ingredients in adult toys, and sexuality during illness.